Lake County State’s Attorney Michael Nerheim has brought leadership, experience and compassion to the office, transforming how justice is served, laws are enforced and lives saved.

As State’s Attorney, he oversees an office of 140 attorneys, investigators, victim coordinators, paralegals, and support staff, plus two certified comfort dogs, one electronic detection dog, and a corps of volunteers.

Upon assuming office in December 2012, State’s Attorney Nerheim worked to make the office more efficient, effective and transparent, while ensuring justice and fairness for all, and to right past wrongs. Today, the Lake County State’s Attorney’s Office is regionally and nationally recognized for redefining how seeking justice, includes saving lives, protecting children, and creating innovative programs, goes far beyond conventional law enforcement and prosecution.

Restoring Trust and Pride with Leadership and Integrity

In 2012, the pressure was on to respond aggressively to prevent wrongful convictions, tackle violent crime and the emerging opioid epidemic in our community, and to restore the public’s trust in the office.

Mike Nerheim is recognized for vigorously prosecuting violators of the law and respecting the rights of victims and the accused while ensuring justice for all.

Mike delivered on his campaign promises

with swift and bold initiatives.

As State’s Attorney, Mike created a first-of-its-kind Case Review Panel consisting of diverse volunteer legal professionals, some from outside of Lake County, who bring a wide range of experience. As an independent review board, the panel’s duty is to focus on the issue of wrongful convictions. When the panel receives claims that evidence exists to support actual innocence, they review and investigate the veracity of the claimed evidence. An in-house Conviction Integrity Unit, made up of senior-level staff, supplements the Independent Case Review Panel. Additionally, he created a Citizens Advisory Board comprised of a diverse group of community leaders who engage the public on key issues related to crime, public safety, and restoring trust in the criminal justice system. 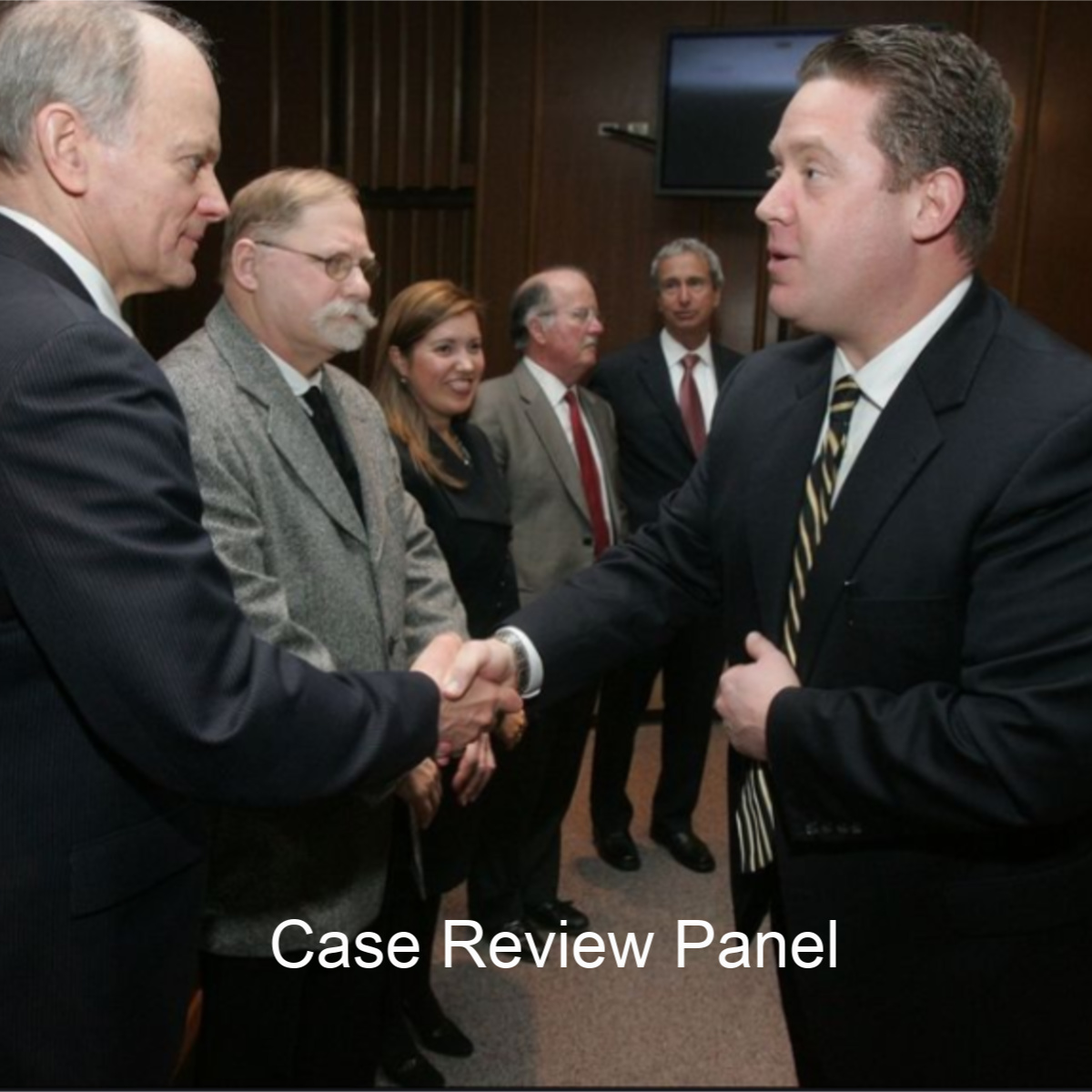 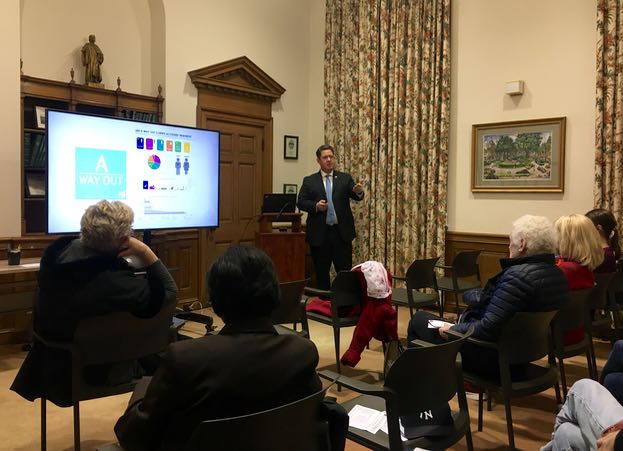 Mike didn’t just put an end to wrongful convictions, he led new community-wide treatment and alternative prosecution initiatives to save lives and prevent recurrences of crimes.

He developed a comprehensive opioid/heroin prevention strategy and co-founded the Lake County Opioid Initiative considered a national model. To date, more than 400 lives have been saved and 700 people connected to treatment.

The Lake County Opioid Initiative is comprised of 300 members from law enforcement, first responders, treatment providers, local hospitals, school districts, faith community, government officials, and people in recovery. Lake County was one of the first in the nation to train and provide all first responders with Naloxone – a drug that reverses the effects of an overdose.

The groundbreaking A Way Out program fast-tracks those seeking treatment to substance abuse programs and services. Lake County’s drug disposal program safely disposes of more than 18,000 pounds of prescription drugs annually and is used as a model by the DEA in shaping disposal networks across the country.

Under his leadership, the State’s Attorney’s Office designed Alternative Prosecution Programs. These programs  offer first time, non-violent offenders who, in exchange for accepting responsibility for their criminal conduct, have the opportunity to keep a conviction from being permanently entered on their record. The programs give deserving defendants a second chance to improve their lives, and to avoid the stigma of a criminal conviction.

Lake County State’s Attorney Michael Nerheim is a dedicated public servant, family man and active member of the community. He is recognized for vigorously prosecuting violators of the law and respecting the rights of victims and the accused while ensuring justice for all.

State’s Attorney Nerheim was twice named State’s Attorney of the Year by the Illinois State Crime Commission (2017 and 2014). In 2020, he was recognized by the GPF Foundation with the Harm Reduction Award. In 2019, he was recognized by the Lake County Opioid Initiative with the LCOI Service Award and by the Lake County Chiefs of Police Association with the Friend of the Organization Award. In 2018, he was awarded the Distinguished Partner of the Year by UBNI. In 2016 he was the recipient of the Whitney M. Young Jr. Service Award by the Boy Scouts of America, 2016 Judge Robert S. Smith Jr. Humanitarian Award by Red Mass Committee, and the 2016 Law Enforcement Innovation Award by Lake County Municipal League. Furthermore, he was named the 2015 Justinian of the Year by the Coalition to Reduce Recidivism and received the 2015 Executive Director’s Award by the Lake County Juvenile Officer’s Association. In 2014, he was awarded, the 2014 Frederic Milton Thrasher Award from the National Gang Crime Research Center for outstanding leadership in prosecution, and the 2014 Moxie Award from the Illinois Coalition Against Sexual Assault (ICASA) for supporting sexual assault victims and justice through the criminal justice system. State’s Attorney Nerheim was recognized with the 2014 Community Leadership Award from the Overdose Awareness Day Planning Committee and the 2013 Home for the Holidays Award from Waukegan Township for his dedicated service and commitment to the Eddie Washington Center and Staben House. Lastly, he was awarded the 2013 Person of the Year Award by the United Hellenic Voters of America.

Mike is a lifelong resident of Lake County and he and his wife Andrea are raising their three children here.  Mike is the youngest of four siblings, reared to be good citizens,  independent and hard-working, always willing to do the right thing, to be there for family, friends, and neighbors to be there in times of need and to celebrate in times of joy.

Mike began his legal career in 1999 as an Assistant State’s Attorney. He has extensive experience working in all criminal divisions of the Lake County State’s Attorney’s Office, handling every type of case including traffic, misdemeanor, domestic violence, criminal sexual assault, drug trafficking, gang-related crimes, crimes against children and the elderly, official misconduct, and murder.

Mike is an experienced prosecutor and former defense attorney with more than 20 years of experience and perspective on both sides of the law. His in-depth experience includes not only criminal law but also areas of complex civil litigation and municipal law. As a private practitioner, Mike was appointed by the courts to investigate post-conviction issues and has represented indigent defendants.

As a former Assistant State’s Attorney and defense attorney, and now as State’s Attorney, he is respected by the defense bar, victim advocates, and federal, state, and local law enforcement.

Mike hosts and participates in numerous educational and public safety forums across Lake County. He also is frequently called upon to lecture nationally on a variety of criminal justice issues, including gangs, conviction integrity, and the opioid epidemic. He is on the faculty at Columbia College of Missouri where he teaches “The Laws of Evidence,” “Ethics in Law Enforcement” and “Victims in the Criminal Justice System.”

Mike has demonstrated strong leadership and business experience, and is extensively involved in the Lake County community. In addition to chairing the Opioid Initiative, he chairs the Lake County Domestic Violence Council, the Lake County Sexual Assault Council and the Lake County Juvenile Justice Council. He was appointed as Co-Chairman of the Suburban Anti-Heroin Task Force and co-chairs the Executive Committee for Fight Crime: Invest in Kids Illinois. In December 2018, he was elected by his colleagues in the Second Judicial District to serve on the Board of Governors of the Illinois Office of State’s Attorneys Appellate Prosecutor and was elected by members statewide to serve on the Executive Committee of the Illinois State’s Attorney’s Association. He is on the board of directors of Nicasa, Lake County Bar Foundation, Northeast Illinois Council Boy Scouts of America, Former Inmates Striving Together (F.I.S.T.) and Arden Shore Child and Family Services. He serves on the College of Lake County Criminal Justice advisory board and the advisory boards for Lake County Crime Stoppers and Staben House. Mike is a former member of the National Commission on Forensic Science Sub-Committee on Human Factors in Washington, D.C. Mike is a member of the Illinois Juvenile Justice Reform Commission, the Illinois Sexual Assault Evidence Tracking and Reporting Commission, the Lake County After School Coalition, and the Lake County Underage Drinking and Drug Prevention Task Force. Mike is the Judge Advocate, Lake County Council of the Navy League of the United States and serves as Teen Court Judge in Warren Township.